Engelbert frowned, trying to understand why Pamela had been acting strangely. Her programming skills were among the best in the company. She had a way of getting things completed. That’s why he made her project lead for Uberdenke’s next UDCRM product release.

With only two weeks left until the ship date, Pamela’s personality had shifted. Normally calm and composed, she had been seen crying after meetings. Occasionally he could hear her screaming at the programmers working for her. Something had to be done. He was going to have to figure out what was wrong with Pamela. And fix it.

Engelbert’s decision casts Pamela as an “Identified Patient.” The Identified Patient becomes the focal point for the Engelbert’s intervention work to “solve the problem”. When Pamela is “cured”, Engelbert thinks, he can return to his normal schedule. Until then, he has more important work to do.

This seems straight forward enough. But how do these relate to each other? Using a diagram of effects we can visually represent the process as 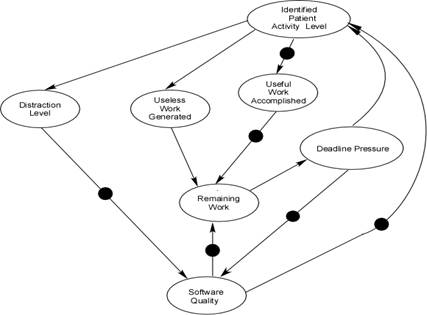 This diagram shows the downstream effects these actions cause. Eventually these actions adversely impact Remaining Work, which increases Deadline Pressure, which increases Identified Patient Activity Level. And the dynamic starts over again with amplification due to the prior looping. The loops are all negative feedback loops. This means once Pamela (or anyone) becomes the Identified Patient, the system starts down hill, and continues until it hits a natural limit and stabilizes or collapses.

Without knowing it, Engelbert and the UDCRM team become embroiled in activities that add more pressure to system, thereby creating more Identified Patient Activity Level on Pamela’s part. By trying to “cure” Pamela, Engelbert engages in treating the symptom, not fixing the problem. In this case, Deadline Pressure continues to build, creating more stress and exacerbating the Identified Patient Activity Level.

All Stressed Up and No Where to Go

What does Pamela’s worldview look like? She’s the project lead for the next release of UDCRM. The project started with a bad release date (see “The Liar’s Contest”). Engelbert knows this (“No Exit). The project team can look at the remaining work and see they won’t make the ship date.

In this case the formal system won’t acknowledge the inevitable until it’s too late. The project team (informal system) knows they can’t meet the date, but for a variety of reasons don’t feel able to update the formal system with their reality. The incongruence between the formal and informal system takes a mental and physical toll on the employees by creating stress. To protect the others from blame, one of the people may actively (but perhaps not consciously) adopt the role of Identified Patient by “acting out” in bizarre ways. This behavior serves to distract management’s attention from the other people, but at the same time distracts them from the true, underlying problems. In the short run, then, Pamela is rewarded for her bizarre behavior, and reinforced to continue “protecting others.”

When Engelbert starts trying to “cure” Pamela, two problems occur. First, the Identified Patient dynamic starts, engaging the negative feedback loops. Second, Engelbert’s attention becomes focused on Pamela, and misses the opportunity to look for a fundamental problem. Trying to “cure” Pamela may momentarily reduce pain, but–because the real problems are not being addressed–this ultimately leads to system collapse and much more pain. 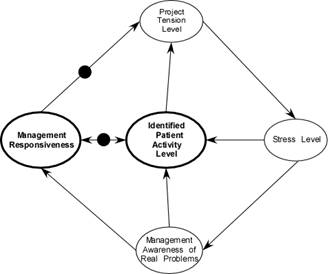 Both loops keep on keeping on, resulting in more of what we already have. This results from the Identified Patient’s second order nature. Second order nature doesn’t mean the tension and stress aren’t real. It means some other problem causes this problem. Trying to cure an Identified Patient is like scratching athlete’s foot. You’re doing something that feels good, but when you quit scratching you still have athlete’s foot, and wounds from the scratching, which has also spread the fungus more widely.

To improve the situation, Engelbert needs to move from the negative reinforcing loop to the Tension/Stress/Awareness/Responsiveness balancing loop.

What You See isn’t What You Get

To “cure” Pamela, Engelbert needs to determine what’s making Pamela act out. Difficulties with this include:

Management acknowledging the delivery slip would relieve the deadline pressure and stress wouldn’t build. Unfortunately managers promote what they want to hear with such comments as:

Comments like these ensure that managers only hear good news, until there’s no possible way to hide the bad news. Then they ask, “Why didn’t they tell me sooner?”

Pamela’s behavior indicates a problem exists, but doesn’t give a clue what it might be. Pamela could be acting out because of:

Most software development managers made it there by having great technical skills, not great people skills. If Engelbert discovers the problem isn’t work related, he’ll need help. Dealing with personal problems in a work environment can be a legal minefield, and is best left to people trained to do it.

In the extreme case, Engelbert may choose to blame Pamela for the project’s problems. While incongruent and counterproductive in the long term, this tack appears to have short-term benefits. Pamela becomes the scapegoat, and hopefully the problems will leave when she does. In the mean time, a new delivery date will be set (while in panic mode). This temporarily relieves the Deadline Pressure. This dynamic may execute several times, until eventually some new delivery date finally provides the time necessary to complete the project. Or, the project collapses under all this extra effort and emotion.

Dealing with an Identified Patient

Identified Patients exist everywhere. The tip-off comes when you hear or think, “Things would be better if this person would just leave.” In reality, that person leaving won’t change the underlying system, and someone else will take on the role. The key to success starts with understanding the Identified Patient functions like a canary in a mine. They provide an early indication something is wrong and needs to be dealt with, but replacing the dead canary will not clean the toxins out of the air. Unfortunately, unlike the canary whose death tells the miners that the air is probably poisonous, the Identified Patient doesn’t indicate what problem exists. One thing for Engelbert to consider: the closer he gets to finding the real problem, the more Pamela may act out. One of Engelbert’s options involves getting the UDCRM team to focus on the remaining work, thereby reducing the attention given to the Identified Patient Activity Level. This becomes an exercise in active support and barrier removal, not platitudes and posters about success through working harder. If the Identified Patient Activity Level gets even larger, this indicates that something else is going on.

If Engelbert can remove Pamela from the system, it might allow the problem to show. Of course removing Pamela might cause other problems which would again mask the original problem provoking Pamela’s behavior. Another person becoming the Identified Patient would indicate underlying system problems. If the Identified Patient Activity Level prevents any useful work from being accomplished, this may be the first action to take. Hopefully, Engelbert will be able to find and fix the problem that created the IP. Engelbert needs to be aware some fixes actually exacerbate the symptomatic problem. Common fixes that fit this dynamic include:

Engelbert has several options available to relieve the Deadline Pressure causing Pamela’s behavior. He can use any one of three project leverage points to change the amount of Deadline Pressure: 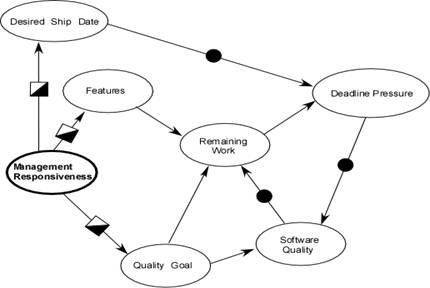 At this level we now have balancing feedback loops that help stabilize the system. Selecting the best leverage point or combination involves determining how the Uberdenke clients can best be served.

What to do if you’re the IP

Identified Patient behavior has several possible causes. These include:

“If what you’re doing isn’t working, try something else.” Marvin’s First Law1

If you’re bored, change yourself. Try and find a more challenging position in the company. Take up a hobby that will provide the challenge you’re looking for. If necessary, consider changing companies. Get interested in solving some real problem that’s hindering others.

Triangulating due to incongruent systems doesn’t accomplish anything. The systems eventually align when the informal system collapses and the formal system has no choice. This usually happens too late to do meaningful risk management and damage control. Much pain accompanies the collapse. Trying to alert the formal system to impending doom may get you labeled as “Nay-sayer”, “Not a team player” and such. If this happens, consider changing companies.

While a nice concept for those taught to “play nice with the other kids”, triangulating by covering for other people boomerangs at two levels. You’re not going to be able to do the work for two people, the amount of remaining work will go up, leading to deadline stress, and the incongruent systems dynamic comes into play. Along the way, you’ll become exhausted and your health, both mentally and physically will deteriorate. This reduces your ability to produce and the cycle starts over again. It’s OK to occasionally help other people. But if helping other people gets in the way of getting your job done, learn to say no, or find another company to work for. Whatever you do, do it directly. There’s enough confusion without adding triangles to the mix.

Lastly, if you can’t change the system, and changing companies isn’t an option (and sometimes it isn’t), recognizing the dynamics that create the Identified Patient behavior can help you cope as congruently as possible.

www.donaldegray.com
View all posts by Don Gray →
This entry was posted in Articles and tagged Organization, Systems Thinking. Bookmark the permalink.

1 Response to The Identified Patient Pattern