Why Not Ask Why?

As this got retweeted, interesting questions started coming my way:

“Why” questions have the ability to both gather data and to probe for underlying thoughts and decisions that lead to action. Other interrogatives (what, when, where, how) provide a better way to gather data since they focus on physical items or actions.

I was writing process control code for a living when I first heard about the Five Whys. It made sense for finding a problems root cause. The example went something like this:

Asking why uncovers another layer of information that eventually leads to the problems root cause and allows us to craft a solution to (hopefully) prevent the problem. Since were starting with observable data, asking why works well here.

Anyone who has spent time around children has probably experienced a period of incessant whys.

Why is the sky blue? Because air molecules scatter light from the sun.

Why do the air molecules scatter the light? Because they get in the way of the suns rays.

Why do they get in the way?

Often, the question-and-answer process ends with Because I said so, thats why.

Asking why provides children with new information, and data expands their knowledge, so why works well hereat least until Because I said so.

Your teammates, managers, and coworkers are neither mechanical processes, which dont care if we talk about them, nor five-year-olds attempting to gather more information about their world. They come complete with experiences you dont know about and ideas about how things should work. As such, your why questions may trigger in others an emotional response that catches you unaware. What might generate such a response?

The Satir Interaction Model [1] provides a framework for understanding how interactions proceed, as shown in figure 1. 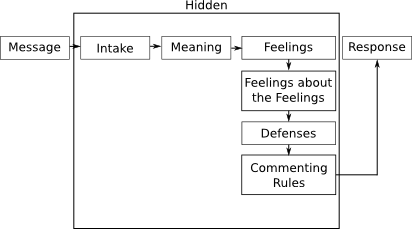 Take Tony, for example. Youve noticed the build server has been sending emails announcing that the build broke, and Tony usually makes the commit that occurred just before the build that broke. Wanting to be helpful, you head to Tonys cube and ask, Why do you keep breaking the build? Youre looking for information. The message has been spoken and becomes the input.

Based on how Tony feels and his background, he can infer several different meanings. He may think youre picking on him. He may think you mean Tony, youre incompetent. He may interpret the question as a request for information.

The meaning Tony chooses determines his feelings about your message. If he thinks youre picking on him, perhaps he will feel afraid or threatened. If he believes you think hes incompetent, he might become defensive, or he might be relieved that you might help with the problems hes having.

Tony also will have feelings about those feelings based on his background. Perhaps his father taught him not to back down when threatened, or to prove youre right when challenged, or even that accepting help shows weakness. Tony may feel ashamed, angry, confused, or relieved.

Based on Tonys life experiences, he may defend himself by:

After these steps, Tony will work on his response. What can he safely say? What do his family, social, and corporate cultures say about what he can say? Some comments can be career limiting. Does he have an always be agreeable rule? These commenting rules affect his verbal response.

Everything between the Intake and Response steps happen internally for Tony, but you can guess what happens based on his response. If Tony replies in a way congruent with your intentionIm having problems with formatting. Can you help me figure out whats happening?the request for information succeeded. If Tony becomes bellicose, belligerent, or his answer bewilders you, the question triggered a meaning and feeling not related to your request for information.

The Interaction Model and Temperaments

In Congruent Action [2] Gerald M. (Jerry) Weinberg collapses the steps from Feelings through Defenses into a single step, which he calls Significance, and correlates how Keirseys Temperaments [3] (see the sidebar) tend to work through the Interaction Model:

More than half of IT professionals implicitly skip the Intake step based on their personality preference. You want to know why to collect data41.6 percent will look for the meaning behind your question and another 12.1 percent think about how the question makes them feel.

Use Data Questions to Gather Data

Questions that start with other interrogative words, such as when, what, where, and how, help people focus on the data aspect of the question.

If we ask Tony a different question, we can help him focus on the data we would like to knowfor example, What steps do you take prior to committing to the build server? or How do you decide its time to commit your code? Tony still traverses the Interaction Model, but weve explicitly asked for data.

Over the years, Ive had some why questions bounce back to me with responses that left me wondering how what I said triggered that response. Using the Satir Interaction Model, Ive learned to unravel the responses. Ive also learned that if I want data, I should use data-oriented questions that start with how, what, when, and where, and use why as a last choice.

On the other hand, if you want practice unraveling communications, start with why as often as possible.

“There are two types of people: people who divide people into two types and those who don’t.” Barth’s Distinction

In 1978, David Keirsey and Marilyn Bates developed and described the temperaments in modern form. They found that selectively combining [N with T/F and S with J/P] produced a descriptive personality system similar to the four temperaments … described centuries earlier. [4]

When the only tool you have is a hammer, it is tempting to treat everything as if it were a nail. Abraham Maslow

I like to remind clients that temperaments represent one way of understanding people and how they interact.

This article was originally posted on StickyMinds.com on January 28, 2011

www.donaldegray.com
View all posts by Don Gray →
This entry was posted in Articles and tagged collaboration, Communication. Bookmark the permalink.